Covered in myths and history, modernized yet unspoiled, Kea –also known as Tzia- appeals to almost every type of visitor. It is primarily considered, among other Greek islands close to Athens, as a weekend destination (it’s only one hour from the port of Lavrio). However, it is fortunately more than that. Twelve marked walking paths reveal a typical Cycladic rocky landscape, interrupted by fertile valleys with oaks and almond trees, as well as a number of attractive beaches and small coves.

The past and the present are manifested in numerous ways on the island. Ancient Kea used to have four city states -Ioulida, Karthea, Koryssia and Poiessa-, whose relics form part of the island’s main sightseeing spots. Nowadays, Kea maintains its calm, traditional face, combining it with good touristic infrastructure, trendy hangouts and remote regions. The port of Koryssia (or Livadi) is fairly touristic and an excellent base to explore the island. First stop is Kea’s aristocratic town Ioulida or Chora. Different from the rest of the Cycladic Greek islands, it’s amphitheatrically built, with red tiled houses, roofed arcades, a maze of tiny cobbled streets that you can only walk (no vehicles are allowed in Chora), the lively main square and the ruins of the Venetian old Kastro and deserted mills at its top.

Architecture is even more surprising in cosmopolitan Koundouros, one of the island’s most popular coastal settlements, where restored windmills have turned into luxurious holiday homes. On the other hand, the village of Vourkari is also touristic but more low-profile, famous for its fish taverns and nightlife spots. Kea is a summer resort that seems to have it all, including many surprises in store for all of its fans –both loyal and potential- who appreciate its modest, serene personality.

Find more information on Kea at the official website for Greek Tourism VisitGreece.gr

: The main beach of the settlement is quite large, organized and crowded. Nearby you can find small, calm sandy bays to swim in. 8.0

: The longest beach in Kea, sandy and family friendly, is located at the village of the same name. Facilities are available. 8.0

: Partly organized beach, with fine sand and crystal waters situated at the homonymous village. The island’s camping site can also be found there. 8.0

: Once you arrive, you will surely forget about the dirt road that leads there and enjoy the peaceful atmosphere and lovely waters of this beach. 7.0

: Its remains are truly impressive. Among them, you will see the city’s acropolis and the temples of Athena and Pythios Apollon. It’s accessible by boat or hiking. 9.0

: A trademark of Ioulida, it’s a 6th century BC sculpture carved on a rock that bears an enigmatic smile. According to the myth, this lion chased away the island’s former inhabitants, the Nymphs. 9.0

: Visit the ruins of the prehistoric settlement of Agia Irini - it was one of the most important cultural centers of the Aegean, until the 15th century BC, when it was destroyed by an earthquake. Also, the Hellenistic 20m tower of Agia Marina, a significant fortification monument of the island. 8.0

For excellent views of the island

: For excellent views of the island, visit the historic Monastery of Panagia Kastriani, 7 km east of the coastal settlement of Otzias. 7.0

: A celebration of fairytales that takes place every July, with the participation of many storytellers, musicians and artists from all over the world. 7.0

: Try “loza”, a traditional snack of salted pork meat and “paspalas”, pork with eggs and tomato. 6.0

No text reviews of Kea exist. You can be the first one to review Kea. 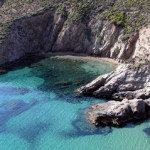