Kastellorizo, the easternmost of the Greek islands, can be a unique experience for the well-informed visitors. This tiny remote rock, also called Megisti (eng “the largest”) is indeed the largest of a complex of 14 islets in the Dodecanese. Kastellorizo acquired international fame thanks to the Oscar winning movie “Mediterraneo” that was filmed here in 1991. However, mass tourism seems to have “skipped” this serene and atmospheric place (distance from mainland Greece is probably discouraging, too – Kastellorizo is located five hours by boat from the island of Rhodes and less than half an hour from the Turkish coast).

Nonetheless, this Greek island is an attraction per se for several reasons. First of all, it boasts of a rich yet turbulent history: Due to its geographical position, it once was a mighty harbor and fleet. It has been occupied by various conquerors, while the 1926 earthquake and the WWII bombardments devastated it. Locals fled over the years and many of them became immigrants to Australia. Nowadays they try to support in every way they can their homeland of less than 400 hospitable inhabitants.

Rugged Kastellorizo is also a place of contradictions: There are no beaches, but beautiful crystalline waters to dive in, as well as the famed phantasmagoric Blue Cave. Moreover, the island features only one settlement: The picturesque preserved capital and port of Kastellorizo, which resembles an elegant painting in the Aegean. A calm bay adorned with amphitheatrically built, colorful red-tiled mansions that reflect on blue-green waters, plus cobbled streets, old houses, churches and the castle of the Knights of St John at the settlement’s hilltop. Kastellorizo, this unspoiled destination at the end of the Aegean, is literally and metaphorically extreme: You can either love or hate it – there’s nothing in between.

: Another swimming option is the cave of Parasta, also known as "Blue Cave" (for more details, check out the “Things to see & do” section). 9.0

: You can also swim at the beaches of the neighboring islets of Ro, Strongyli and Agios Georgios . 8.0

: The only beach on the island is located at the port. It is small and features sand and pebbles. 7.0

The areas of Plakes, Faros, Kavos

: Accessible by boat. Here you can dive from rocks or platforms. 7.0

The Blue Cave (also known as Cave of Parasta or Fokiali)

: The Blue Cave (also known as Cave of Parasta or Fokiali): A must experience in one of the most impressive underwater caves found in the Greek islands and the Mediterranean. Only a small boat can take you there, as the cave’s entrance is so confined you’ll practically have to bend down or swim in it. The stalactites and stalagmites, the iridescent light, the water reflections and various colors create a truly unique spectacle. The cave is also home for many animal species, including the monk seal. 9.0

Sights at the capital

: The Knights of St John named the island Kastellorizo (Castello Rosso) because of the red cliffs above the town – at that very spot they built in the 14th c a prestigious castle, whose remains can be visited today. At the foot of the castle, you can also see the island’s landmark monument: The preserved 4th c BD Lycian tomb, carved in a rock (its name comes from the inhabitants of Minor Asia, also called Lycians). 8.0

Boat day trip to the islet of Ro

: Located at the southwest of Kastellorizo, it is famous for its sole inhabitant, the so-called “Lady of Ro” aka Mrs Despina Achladioti. She used to raise the Greek flag every day on this tiny piece of land for many decades, until she passed away in 1982. A memorial dedicated to her is built on the islet. 8.0

: It takes 401 steps to reach it, but the views from this fascinating site are absolutely rewarding. Surrounded by huge stones, this deserted monastery resembles a fortress and hosts a catacomb, among other things. 8.0

: Fresh fish and sea food is the island’s gastronomic trademark. You can also try specialties such as kid goat meat stuffed with bread crumbs, pilafi (rice) and revithokeftedes (balls made with chick peas). Also, a variety of sweets like katoumari (sweet pie), strava (type of baklavas) and chalvas (made with semolina). 8.0

: This is the island’s top ancient monument - the ancient capital that features the remains of a 3rd c BC Doric acropolis, cisterns, buildings, three churches, plus panoramic views. At the same area (Limenari) you can see the relics of cyclopean walls. 7.0

: The island’s two major feasts take place on July 20th (to honor Prophet Elijah) and on May 21st at the Cathedral of Agios Konstantinos and Agia Eleni. Moreover, on the 13th of September Kastellorizo celebrates the Day of Independence. 7.0

: The famous Turkish cosmopolitan resort with its well-known bazaar is merely half an hour from Kastellorizo by boat. It’s one of the most popular excursions and surely worth a visit. 7.0 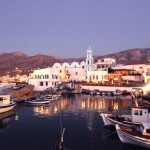