Sikinos has never been popular with tourists, but it has always been a real charmer for travelers who choose peaceful, low budget vacations in an unspoiled, low-key environment. This small, under populated Greek island is situated between Folegandros and Ios; it’s rugged and scented of thyme and herbs. Sikinos features the typical Cycladic looks and (thankfully) limited touristic facilities.

The locals respect their island and protect it from overdevelopment, plus they are extremely hospitable. They will encourage you to participate in the numerous summer feasts and tell you all about Sikinos’ highlights. The best way to explore the island is by boat or foot: It boasts of a remarkable network of paths, while its few, but marvelous beaches are mostly accessible by walking or caique. Sikinos’ atmosphere is hard to define: It feels elusive but at the same time tangible. The small harbor of Alopronia is very accommodating and offers the majority of the island’s facilities.

Chora, at the north, is one of the most beautiful in the Greek islands. It consists of two settlements – Kastro (castle) and Chorio (village). Kastro is built at the edge of the cliff: It is a 15th c fortified settlement with old mansions, stone houses, windmills and the landmark church of Pantanassa at the main square. It is also the island’s meeting point with lovely places to eat, drink and shop. Meanwhile, Chorio is a stylish restored settlement with a maze of narrow alleys, terraces, old houses and the Folklore Museum, housed in an old olive press. Traditional and relaxed, Sikinos addresses to visitors who wish to escape modernity and urban comforts. Once you decide to leave all this behind, this Greek island will surely reward you.

: Two small and secluded pebbly beaches with emerald waters, located in two successive coves accessible only via a footpath. The name “Santorineika” originates from the islanders of Santorini, who used to upload here their caiques with goods from Sikinos. 9.0

: The second largest beach on Sikinos is a beautiful, sandy and quiet seashore with a few tamarisk trees and zero facilities, apart from a nearby tavern. It is accessible either by car or caique. 9.0

: You can access this small sandy cove with lovely waters by boat or, if you’re brave enough, by hiking (2 hours from Kastro). There’s no shade here, so make sure you carry an umbrella, as well as other supplies. 8.0

: Only a boat can lead you to this small, isolated beach, ideal for privacy and relaxation. It features a small cave that offers nice shade. Supplies are absolutely necessary here. 8.0

: Located next to the island’s port, this sandy, family friendly beach is well organized and popular. It features some trees that provide shade and offers all the amenities of the homonymous settlement. 8.0

: It is situated between the former two beaches and you can reach it by car or caique, as well. It is small, sandy, with crystalline blue-green waters and a few umbrellas. Just make sure you get supplies. 8.0

: One of the top sights in the Greek islands and the most important attraction on Sikinos, Episkopi is a monastery complex that reflects a great part of the island’s history. It is an idiosyncratic, enigmatic monument. Originally considered as the temple of Apollo Pythios and later as a 3th c AD roman mausoleum, it became a domed Christian temple (Church of Kimisis Theotokou) in the 17th c. It is surrounded by byzantine chapels, cells and ancient ruins, amidst a luring rugged and dry landscape. 9.0

: The neighboring Greek islands of Folegandros, Ios and Santorini (with its small satellite island of Thirasia) can be reached from Sikinos by boat within two and a half hours maximum. 8.0

: One of the most famous customs in the Greek islands is held every year in Sikinos. It is called “panigyrades” and it’s associated with the island’s religious feasts (gr. panigiria). According to the tradition, some of the islanders become hosts of the icons found in the island’s churches of Pantanassa, Stavros, Zoodochou Pigis and Eisodia Theotokou. They keep the icon in their houses for a year and when it’s time to celebrate the feast, they take care of all the necessary preparations and deliver the icon to the next host. 8.0

: Built in 1690 and closed in 1834, it is a restored fortified monastery that became the islanders’ prime refuge during the attacks of pirates. It is situated at the top of the hill above Chora and offers superb views. Nearby you can also visit Mavri Spilia, one of the largest in the Cyclades, which is accessible only by boat. 8.0

: The popular “Sikinos Festivities” (gr. Giortes Sikinou) take place every summer, presenting a variety of cultural events such as exhibitions, art performances and music concerts. The event also includes “Documentary Days”, a documentary film festival held in open spaces at Sikinos and the island of Donousa. 7.0

Trademark churches in the village of Kastro

: The late byzantine church of Panagia Pantanassa, located at the middle of the settlement, features important hagiographies of the famed Cretan School and attracts many believers. Also in Kastro, the church of Panagia Pantochara is dedicated to the memory of the Nobel Prize winner Greek poet Odysseus Elytis. 7.0

: The island’s excellent, delicious thyme honey is your number one choice. In Sikinos you can also taste high quality wine, cheese and caper. As for the specialties, don’t miss the stuffed lamb in the oven, caper salad and casserole string beans. Also, try pasteli (sweet with honey and sesame) and rakomelo (drink with raki and honey). 7.0

No text reviews of Sikinos exist. You can be the first one to review Sikinos. 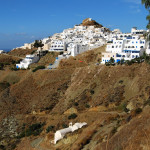