Limnos is probably among the most uncharted Greek island destinations, for both natives and foreigners. The main reasons could be its low-key character and remote position at the Northeast Aegean (also associated with a strong military presence on the island). However, the truth is that Limnos has so much to offer: exceptional natural beauty and ancient sightseeing, marvelous sandy beaches for all tastes, as well as quality local products and gastronomy.

Bays and coves, volcanic rocks, fertile plains, hills and wildlife form part of a virgin landscape, hard to forget. At the same time, tourism and modernity haven’t spoiled the traditional character of the island of god Hephaestus. Myrina, the capital and port, will impress you with its alleys, agora, old stone mansions, picturesque fishing port, busy waterfront and the two bays – Romeiko Gialo (with neoclassical houses) and Turkiko Gialo (the former Turkish quarter). The town’s dominating Venetian castle that overlooks the region seems to have stepped out of a fairytale, especially when it’s lit at night. In Myrina you can also find many find fish taverns and nightlife spots.

The enclosed bay of Moudros is the second largest town on Limnos – among other highlights, it features the islet of Koukonisi, with an important prehistoric settlement. The third largest village on the island is Kondias, with traditional stone houses, windmills, churches and pines. Other popular settlements include the coastal Platy and Thanos (with homonymous beaches), the fertile area of Atsiki, the agricultural village of Sardes (one of the oldest ones on Limnos) and many more. Discovering Limnos means going back to basics: Sun, sea and the traditional Greek island hospitality, in their most authentic version.

: Among the island’s best beaches, it is located at the village of the same name. It is sandy, organized and features strange rock formations and lovely waters. Nearby you can also visit the church of Panagia Kakaviotissa, impressively built inside a grotto, among rugged rocks. 9.0

: A large sandy beach with sun beds, umbrellas and a beach bar, ideal to swim and relax – it is close to the island’s area of ammothines (sand dunes). 9.0

: Situated at the bay of the same name, this sandy, organized beach is the perfect place to practice all kinds of water sports. 8.0

: Near Moudros, this sandy beach is organized and popular with young people. Nearby you can visit the scenic beach of Mikro Fanaraki with its beautiful small caves.     8.0

: Close to the capital of Myrina, this sandy beach with crystalline shallow waters offers relaxation and all the amenities you could wish for. 8.0

: While in Limnos, it is definitely worth visiting this neighboring remote and untouched Greek island. It features pristine beaches and only the basic amenities, making it perfect for nature lovers who prefer low-key vacations. From 1928 until 1963 it used to be a place of exile for political prisoners. The 1968 earthquake left its mark on the traditional architecture, but the island’s character still remains pure and intact. 9.0

: The highlights of the island’s varied landscape include:   9.0

: Polyochni, Kaveirio and Hephaistia are among the most important ancient monuments of all the Greek islands. Polyochni is considered to be the oldest Neolithic settlement in Europe with prominent findings, among which a parliament structure (presumably the oldest in the world). The area of Kaveirio features the relics of a Hellenistic sanctuary dedicated to the famed ceremonies of Kaveirian Mysteries, while nearby you can also see the Homeric Cave of Philoctetes. Hephaistia is the largest ancient city on Limnos – among the relics of this complex you can see the palaces, acropolis, necropolis, temple, baths and roman theatre. 9.0

: Visit the imposing castle of the island’s capital, built on a rocky peninsula – it is one of the largest castles found in the Greek islands. Don’t be surprised if you run into a deer, as many of them roam this area. Next stop is the Archaeological Museum of Myrina with findings of the island’s ancient sights. Finally, don’t miss the sunset from Romeikos Gialos – the sun sets above Mt Athos, offering a memorable spectacle. 8.0

: Limnos is famous for its quality wines and fresh fish. You can also try kalathaki and melichloro (types of cheese), as well as the desert venizelika. 7.0

No text reviews of Limnos exist. You can be the first one to review Limnos. 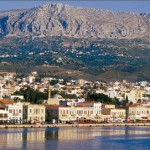