Maybe it’s about time Kimolos finds the special place she deserves among the tourist destinations in the Greek islands. Steadily listed as a day trip from its neighboring Cycladic Milos, it actually boasts of so many unknown virtues. Small Kimolos (“chalk” in Greek) is, like Milos, also of volcanic origin: Rich in minerals, thermal springs, lunar rock formations and stunning beaches of exotic looks.

This island fascinates nature lovers, thanks to its unspoiled landscapes, plus varied flora and fauna (it’s a shelter for the Mediterranean monk seal, rare bird species and marine life). A modest yet intriguing number of sights, mild touristic development and a super friendly atmosphere also contribute to the island’s overall appeal. In Kimolos you are not likely to bump into trendy bars and restaurants, crammed alleys and posh crowds; instead, you’ll enjoy traditional food, authentic places to hang out and relax, as well as truly hospitable people.

Apart from the port of Psathi (one of the most serene in the Greek islands), Kimolos features only one settlement, the picturesque capital of Chorio, also equipped with various amenities. Stroll around the scenic old houses and flowered courtyards, visit the majestic castle and post byzantine churches, and feel as if you were travelling back in time. Kimolos is modest, simple and straightforward: A Greek island of “homemade” charm.

: The most famous and gorgeous beach on Kimolos has white coarse sand and turquoise waters, plus sun beds, umbrellas and a beach bar. Snorkeling fans will adore the sea caves under the chapel of Agios Georgios. The beach can get crowded, while it’s also frequented by various sea vessels (and the monk seal in autumn). The neighboring thermal springs are also another sight worth visiting. 9.0

: Two northern neighboring beaches, sandy and not organized, ideal for isolation and snorkeling. Monastiria lacks shade, while Soufi features some tamarisk trees. They are both hard to reach by car (you’ll need a jeep) or foot (it takes 1.5 hours), so you’d better hop on a caique. 8.0

: Three successive sandy beaches situated at the south, with the basic amenities, tamarisk trees and shallow waters. They are the largest on Kimolos, wind protected and easily accessible. Alyki (eng “salt pan”) features a wetland that hosts many bird species in springtime, while Bonatsa is the trio’s most popular. 8.0

: Three more coves in a row, with sand and a few pebbles, accessible via a dirt road. Enjoy swimming and relaxing, plus some ancient sightseeing at Ellinika and a lovely sunset at Mavrospilia, gazing a group of rocks that emerge from the sea. 8.0

: At the island’s northwest are accessible only by boat (do avoid a windy day).  7.0

: A popular visitors’ choice at close distance to Chorio, this sandy and pebbly shore features tamarisk trees and zero facilities. Its only drawback; it is exposed to winds. 7.0

: The nearby Greek island of Milos is bound to enchant you with its gorgeous beaches and cosmopolitan attitude. 9.0

: The capital’s old settlement of Kastro (eng castle) is one of Kimolos’ best attractions. It’s comprised of two quarters; Mesa (Inner) and Exo (Outer) Kastro, aka two fortified squares of houses built into one another. The dominating medieval castle, two-storey residencies (both ruined and restored), the famed “portares” (arcade gates) and the settlement’s walls are only some of the highlights here. Plus, of course, the Archaeological Museum and Folklore-Maritime Museum, which display a highly interesting overview of Kimolos’ history, lifestyle and traditions. 9.0

: Vromolimni, Konsolina and Gerakia are the island’s most popular ones (accessible by boat). Vromolimni is the largest of them all, while Gerakia is highly impressive, with turquoise waters where you can dive and then walk into the cave. 8.0

: Gastronomy is a real treat on Kimolos. Try the island’s trademark specialty ladenia (pie with oil, tomato and onions – it’s like pizza), as well as tirenia (cheese pie), elenia (pie with olives) and kolokythenia (pumpkin pie). You can also have xino and manoura (types of cheese), choriatiki salad (made with local fresh capper, tomato, small cucumbers of Kimolos and xino), rusks with lentisk seeds, and also pasteli (sweet made with honey and sesame). Before you leave, buy some caper, theme honey and tomato paste. 8.0

: A boat trip around Kimolos is a must excursion in order to explore some of the island’s most pristine beaches, sea caves, as well as the uninhabited islet of Polyegos. The latter is an exotic paradise with beaches of white sand and aquamarine waters. It is well known for its minerals, but also as an ecologically protected area of rich flora and fauna. 8.0

: Walking, diving, snorkeling and sailing are ideal activities in Kimolos. 7.0

: These photogenic constructions with multi-colored doors are carved into the rocks by the fishermen, to house their boats and nets. They are located at the island’s fishing village of Goupa (and the nearby beach of Rema). 7.0

: There are more than 80 on Kimolos, some of which are protected monuments of great historic and architectural value. Visit the cathedral of Panagia Odigitria with its famous icon, the church of Christos (the oldest on the island, found inside the Castle) and the beautiful church of Agios Chrysostomos, also at Chorio. 7.0

: Kimolos’ ancient city is located ashore and underwater at the settlement of Ellinika. The remains include the necropolis, houses and many findings, while relics of the acropolis can be seen on the islet of Agios Andreas (located at a distance of 200m). Moreover, at the island’s highest spot in the area of Paleocastro, lie the remains of an ancient acropolis and cylindrical tower. 7.0

: A rare natural phenomenon and one of the island’s top attractions. Skiadi is a bizarre rock formation that resembles a gigantic mushroom. You can reach it on foot, preferably early in the morning or late in the afternoon, in order to avoid the heat. 7.0

: They are situated at the area of Xaplovouni. Visit them at dusk, to enjoy fabulous views. 6.0

No text reviews of Kimolos exist. You can be the first one to review Kimolos. 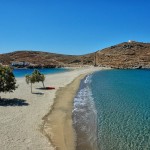