Small and tranquil, Kythnos is probably the most discrete Greek island among the Cyclades. “Tagged” as a weekend destination for many Athenians due to its proximity to the Greek capital, it hasn’t fallen for mass tourism and keeps its beauties largely unspoiled.

Kythnos features lovely picturesque settlements, a surprising number of beaches untouched by touristic development, as well as private spots to wander about. It is also a top destination for sailing lovers and all of those who enjoy thermal springs (they are located at the area of Therma/Loutra). The typical Cycladic feeling is omnipresent in Kythnos in its most low-key version, apart perhaps from the port of Merichas. This settlement is by definition more lively, with many amenities and nightlife, but at the same time preserves intact its traditional character

At the island’s centre lays the beautiful Chora or Messaria with its whitewashed houses, cobbled streets, windmills, churches, cafes and restaurants. Moving south, the village of Driopida, the island’s former capital, is one of the most pleasant surprises on Kythnos: Red tiled houses, a maze of narrow alleys and a serene, absolutely captivating atmosphere. Kythnos has a magical way to create a sense of familiarity from the moment you step on it: It feels like you’ve been here before, but at the same time you’re eager to discover it from the beginning.

: One of the most photographed and scenic beaches found in the Greek islands. It is actually a narrow sandy strip that divides the sea into two beaches with crystalline waters, thus connecting Kythnos to the islet of Agios Loukas. It is not organized and access is rather hard (hiking or jeep), but totally worth it. 10.0

: Located at the northern part of Kythnos, it is an isolated, unspoiled sandy and pebbly beach with green-blue waters.   9.0

: This is one of the largest beaches on the island: Sandy, wind-protected, with tamarisk trees for nice shade and a tavern. Moving on a little further to the south, the popular beach of Episkopi is another option, similar in looks. 8.0

: Long, sandy and quiet, this beautiful beach is situated at the settlement of the same name. It features tamarisk trees and a few amenities. 8.0

: A large beach with sand and crystalline waters, where you should carry your own supplies. Moving on to the north, you can also swim in the beautiful tranquil coves of Simousi and Skylou. 8.0

: Three successive coves at the northeast of Kythnos, linked together via a stepped footpath. They are sandy, not organized and very quiet. 7.0

: This monastery, dedicated to the island’s patroness saint, is situated at a beautiful spot at the village of the same name. The icon of the Virgin Mary is considered to be miraculous and, according to tradition, it was created by Apostle Loukas. A major feast takes place in the church of Panagia Kanala on 15th August. 10.0

: Castle Orias, the former medieval capital of the island, overlooks the Aegean, featuring the remains of houses and two churches. From here you can enjoy the superb views, as long as you mind the rough path that leads to the fortification. Vryokastro is the ancient capital of Kythnos – among the relics here you can see the acropolis, aqueduct and temples. Last but not least, in the area of Maroulas lies a Mesolithic open air settlement (the only such discovered in Greece), with important findings. 9.0

: If you fancy Cyclades in a relaxed, easy-going version, the neighboring islands of Kea (or Tzia) and Serifos are ideal for you. 8.0

: Located at the north side of Driopida village, it is one of the largest in Greece and partly open to visitors, with impressive stalactites and stalagmites. 7.0

: Kythnos is famous for its high quality kopanisti cheese, caper, wine, thyme honey, pasteli (sweet with honey and sesame) and amygdalota (type of almond toffees). As for the island’s specialties, you should try sfougato (cheese ball), kolopia (spinach pie) and savoro (marinated fish). 7.0

: A summer festival with popular cultural events held annually on Kythnos. Together with the island’s various feasts, they are fabulous opportunities for entertainment and fun. 7.0

No text reviews of Kythnos exist. You can be the first one to review Kythnos. 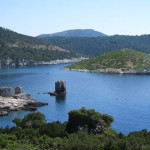