Kithira is admittedly one of the most unspoiled Greek islands: a place where nature, history and tradition fascinate even the most skeptical. Indeed, over the years, the island’s peaceful, sophisticated character has acquired so many loyal fans, Greek and foreign. Located at the southern tip of the Peloponnese, it belongs to the complex of the Ionian islands, but its architecture is basically Cycladic.

In Kythira, medieval cities and impressive castles, byzantine churches and traditional villages co-exist with mountains, caves, green valleys and gorges. The island’s beaches are both sandy and rocky, with really impressive waters. An example of that is the fine beach of Diakofti settlement, the island’s main port. Other popular coastal settlements with marvelous seashores include the touristic resort of Agia Pelagia and Kapsali. The latter is the island’s meeting point, favored by both yacht owners and campers, featuring a multitude of amenities, nightlife spots and a cosmopolitan touch.

At the east, Avlemonas is one of the island’s prettiest villages: a fishing port with Cycladic looks, a Venetian fortress and small coves to swim in. Heading south, Kythira’s picturesque capital Chora is romantic and joyful. Here, the Aegean style of houses mixes with Byzantine churches, Venetian and British elements, while the landmark castle dominates the area, offering spectacular views to the Cretan Sea. Meanwhile, Kythira’s inland showcases many villages of architectural and cultural interest, such as Potamos (famous for its lively Sunday flea market), Mylopotamos (traditional, with interesting sights), Aroniadika and Karavas, among others. The island is perfect for endless joyrides to explore its beauties. On your way, you will surely notice another one of its trademarks: the flower sempreviva, which means “lives forever” – same as the memories you’ll have of Kythira on your way back.

: Perhaps the most popular beach on Kythira. It is pebbly, with turquoise waters, set in a lovely rocky landscape. In order to reach it, you have to descend more than a hundred steps. 9.0

: There are two beaches named Firi Ammos in Kythira. This one is located southeast, near the village of Kalamos. It is large, with red sand and pebbles, deep waters, a cantina, sun beds and umbrellas. 8.0

: Isolated, small and pristine, this pebbly and sandy beach is difficult to reach, but swimmers and snorkeling fans will love it. It requires 15 min of hiking and rappelling down the steep rocks. 8.0

: Crystalline blue-green waters, pebbles and a few amenities are the main characteristics of this beach. Note that it is wind-protected and it can get crowded. 8.0

: A small sandy bay with magical waters and views to the islet of Chitra (Avgo). A beach bar, sun beds and umbrellas are available. 8.0

: Located between Crete and Kithira (2 hours by boat), it is ideal for day-trippers who want to experience a small, pristine rocky island with many natural beauties. It is worldwide famous for the Antikythera mechanism, which is believed to be the first computer system in human history. 9.0

: It could easily be one of the best villages found in the Greek islands, as it offers so many varied attractions: The traditional centre of Kamari with plane trees, springs and a small lake, among others. The idyllic, multi-photographed waterfalls of Neraida (eng “water nymph”). The Mills, a region of immense natural beauty (running waters, lush vegetation and many water mills). Also, the Monastery of Panagia Orfani and the byzantine church of Agios Petros. The other two major highlights of Mylopotamos are the preserved Venetian settlement of Kato Chora, with the remains and the castle, as well as the Cave of Agia Sofia, with the chapel of the same name at its entrance, the 13th c murals and the impressive stalactites and rock formations. 9.0

: From Kythira, you can also head north and explore the neighboring mainland Peloponnese or nearby Elafonisos, one of the most gorgeous Greek islands. Alternatively, you can head south to Crete, the largest of them all. 9.0

: The remains of the island’s Byzantine capital, which include the castle and churches with frescoes. This town was built in the 12th c by Monemvasians (habitants of Greek mainland Monemvasia) who named it Agios Dimitrios. Despite its rugged location -the canyon of Kakia Lagada-, it was ravaged by Barbarossa in 1537. 8.0

: Situated near Avlemonas village, this settlement features the ancient city of Scandia. Nearby, apart from the beautiful beach of Paleopoli, you can also visit the Minoan Peak Sanctuary, with very important findings, set on the mountain of St George. 8.0

: Situated at the north, across Kapsali, this rocky islet is the home of protected flora and fauna. It also features a sea cave with magnificent colors. 8.0

: Kakia Langada and Tsakonas are two of the most beautiful gorges on Kythira.Kakia Langada is a steep one, hard to hike – you need to be specially equipped and experienced. It begins at Trifillianitika village, crosses Paleochora and ends at the lake and (successively) to the beach of Kakia Langada. The gorge of Tsakonas is located between the villages of Mitata and Viaradika and features churches carved in rocks, as well as water springs. It ends at the area of Paleopolis. 8.0

No text reviews of Kythira exist. You can be the first one to review Kythira. 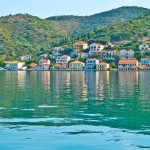