Skyros is one of those peaceful low profile Greek islands that long to be discovered. It is the largest, southernmost and least crowded of the Sporades complex, although it belongs administratively to the island of Evia. Surrounded by small satellite islets, Skyros seems “torn” between its Cycladic, rocky & wild southern part and its northern one, full of pine forests and beautiful bays with beaches for all tastes.

Skyros strongly evokes the past: Tradition, customs (Carnival is a must here) and myths about Achilles and Theseus mingle with local arts (pottery, embroidery, wood carving) and the famed Skyrian horses – an endemic rare species and also the island’s trademark. Tourism is moderately developed and Skyros is friendly to any type of visitor. At the port of Linaria, the musical theme of Stanley Kubrick’s “2001: A Space Odyssey” welcomes you to Skyros, played at full blast by the area’s most popular bar every time a boat enters the dock. Linaria is a top destination to enjoy the island’s abundant fresh fish and lobster.

Meanwhile, the amphitheatrically built Chora is one of the most beautiful in the Greek islands. It reminds the Cyclades and displays fine examples of the local architecture, as well as the byzantine castle and the Monastery of Agios Georgios at the top of the hill. Close to Chora, the settlements of Magazia and Molos are very popular with tourists, while further south, the small bay of Achili is a haven for all kinds of sea vessels. As for the island’s other coastal resorts, Acherounes, Aspous and Atsitsa with the beaches of the same name, are some of the most visited. They offer a charming glimpse of Skyros: A Greek island of unspoiled landscapes and remarkable authenticity.

: This small sandy cove with crystal blue waters, also surrounded by pine trees, is one of the island’s most scenic beaches. There are no amenities here, so you’d better have your own supplies. 9.0

: Two successive beaches located at the settlements of the same name, close to Chora. They are long, sandy, fully organized and very popular, too. Nearby, at the north, you can also swim at the beach of Gyrismata (it’s long, sandy, with many amenities and also windsurfers’ favorite). 8.0

: Isolated and pristine, this pebbly beach is set in a luring rocky landscape and it’s accessible via a dirt road. It offers privacy, clear waters and zero facilities. 8.0

: A pebbly and sandy beach surrounded by beautiful pine trees, situated at the north of the island. It isn’t organized, but there is a nice tavern nearby. 8.0

: This beach features sand, pebbles, blue waters and no facilities. It is a little difficult to access it, but it’s quite popular. The neighboring beach of Kalamitsa, at the north, is ideal for windsurfing. 7.0

: The landmark sights in Chora are the Byzantine castle and the 10th c Monastery of Agios Georgios, both offering superb views. You can also visit the Archaeological Museum, with various findings and a folklore collection. The Faltaits Museum is a prominent cultural attraction on Skyros, embracing its history and culture (it displays important exhibits, among which the “skyrian house”, an impressive representation of the island’s traditional residence). Also in Chora: Take a stroll at the Megali Strata, the cobbled street that leads to the Brooke Square. The latter features a statue dedicated to the British poet Peter Brooke who died on Skyros – it is best to visit in sunset and enjoy the magnificent views to the Aegean. 9.0

: The islet Sarakino at the south of Skyros features the gorgeous beach of Glyfada, perfect for swimming and sunbathing. You can also visit the island’s famed sea caves of Pentekali, Diatripiti, etc, with impressive emerald waters and stalactites. 9.0

: Skopelos and Alonissos are two of the most charming nearby options in the Sporades complex. 9.0

: Their size resembles the size of ponies, but the truth is that Skyrian horses are one of a kind; a rare, protected species, the majority of which lives on Skyros (and in particular at Mt. Kochylas, a Natura 2000 protected area). These horses form part of the island’s heritage. They are supported by the local community, as well as by private donations and institutions who aim to preserve and protect them. 8.0

: Thyme honey, graviera and myzithra (types of cheese) are trademark products in Skyros. As for the island’s specialties, you should try fava (made of chick peas), kid goat meat and of course the excellent spaghetti with lobster. 7.0

: The important prehistoric fortified settlement/port at Palamari is a must-see. The region of Pouria is famous for the ancient quarry located at the seaside, as well as the nearby picturesque chapel of Agios Nikolaos, which is literally carved into a rock. You can also check out the island’s well-known mushroom-shaped rock formation called “Manitari” (eng. mushroom). 7.0

: The annual “Skyros Festival” is held on July and August, featuring art events and music performances, while the island’s numerous religious feasts take place all year long. Skyros is also famous for its Carnival, a celebration of the island’s traditions – the highlights here include the well-known customs of “Geros” (old man) and Korela (young girl). 7.0

No text reviews of Skyros exist. You can be the first one to review Skyros. 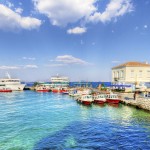