Between the cosmopolitan Dodecanese Kos and Rhodes, lies tiny Tilos, one of the less touristic Greek islands, yet to be explored. Few know and appreciate its virtues, among which nature lovers, birdwatchers, free campers and fanatic hikers. Mountainous Tilos is in fact a protected ecological park, part of the Natura 2000 network, with rich flora and fauna, abundant waters and fertile areas. Plus some charming secluded beaches, mostly accessible by boat or foot (walking is the best way to discover the island, anyway).

Still, there’s more interesting stuff: Tilos boasts of many castles and byzantine churches scattered all over, as well as prehistoric fossils of endemic dwarf elephants, which have been discovered in the famed cave of Charcadio. This serene island offers relatively limited but satisfactory tourist infrastructure, while it’s also perfect to relax and enjoy the sea and sun. Tilos has two main settlements: The port of Livadia and the capital of Megalo Chorio. Livadia is a minimal touristic resort with many facilities, a lovely waterfront promenade, Italian era buildings and a beach.

The small and picturesque Megalo Chorio, built at the slopes of a hill, features great views, exquisite island architecture and the trademark medieval castle, among other sights. Other popular spots on Tilos include the atmospheric ghost village of Mikro Chorio, as well as the coastal settlements of Agios Antonios and Eristos, with the beaches of the same name. If you add to the above the truly hospitable people of Tilos, then you’ve got yourself the perfect vacation – take the chance to enjoy everything on this discrete and enchanting Greek island.

: If you fancy a fully organized beach and don’t care much for walking, the beach close to the port of Livadia is ideal for you, offering all amenities at hand. 10.0

: The longest and most popular beach on the island is sandy, easy to access and features some tamarisk trees, ideal for shade. It’s also free campers’ favorite. It is not organized, but there are a few amenities nearby, such as a tavern, shops and cantina. 9.0

: Long and narrow seashore with lovely waters and many trees that provide nice shade. Free campers are also fond of this isolated, tranquil beach, which is accessible by car. There are no facilities, so make sure you have your own supplies. 8.0

: A quiet, scenic pebbly beach with crystalline blue waters. It’s totally worth the 30min walk it takes in order to reach it via a path from the port of Livadia (otherwise, you can take the boat). Needless to say there are no facilities here. 8.0

: They are among the hardest to access on the island, therefore the caique is highly recommended. Remember to bring supplies. 7.0

: Boat connections are available from Tilos to Nisyros, Symi, Chalki and Rhodes (ideal for a day trip), as well as other Dodecanese islands (Astypalea, Kalymnos, Kos and Kastelorizo). 9.0

: Situated close to the capital of Megalo Chorio, this settlement was founded in the 15th c by the Knights of St John and abandoned in the late 50s (inhabitants fled to developing Livadia). Now it seems forgotten in time, featuring the remains of stone houses and churches, but also a restored chapel, a house-turned to a lively bar and the major feast of Panagia on August 15th. The views from here are among the best on Tilos. 8.0

: Enjoy the panoramic views from the Castle of the Knights’ of St John, built on the remains of the island’s ancient acropolis at the hilltop above Megalo Chorio (the distance is 20 min on foot). Inside the castle you can see the 14th c church of Taxiarchis, also built on the relics of an ancient temple. The remains of the medieval castles of Agriosykia and Messaria are also worth a visit. 8.0

: Tilos’ number one pilgrimage centre is located at a very scenic spot on the island, with superb views. This 15th c fortified monastery features some important frescoes, a nice pebbled courtyard and a guest house, among others. A 3-day feast takes place here on July 27th. 7.0

: This practically includes the island’s protected ecosystem, flora and fauna, which form part of the Natura 2000 network. The non-profit “Tilos Park Association” contributes in promoting the above, with the aim to preserve the island’s natural heritage. 7.0

: The island’s famed kid goat meat baked in the oven with potatoes, as well as fresh fish and sea food are Tilos’ gastronomic trademarks. You can also try giaprakia (vine leaves stuffed with rice and mince), kavourmas (specially cooked pork meat), tsouvras (tomato soup with rice) and chondro (wheat cooked in water or milk). As for the sweets, have some melekounia (pouches stuffed with almonds and sesame). 7.0

: Although its interior remains closed to visitors, it’s one of the top attractions on Tilos, thanks to the various prominent paleontological findings discovered here, among which the fossils of dwarf elephants dating from 50.000 to 4.000 years ago. Some of these findings are displayed at the Museum of Paleontology at Megalo Chorio. 7.0

No text reviews of Tilos exist. You can be the first one to review Tilos. 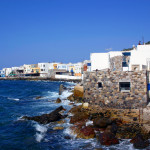 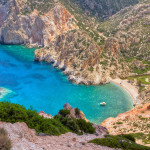 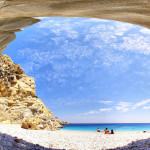 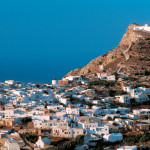